Wikipedia tells us: ”Osteichthyes /ˌɒstiːˈɪkθi.iːz/, popularly referred to as the bony fish, is a diverse taxonomic group of fish that have skeletons primarily composed of bone tissue, as opposed to cartilage. The vast majority of fish are members of Osteichthyes. It is the largest class of vertebrates in existence today”. Well, our own interpretation of Bony Fish is a little bit more minimalistic and – as we hope – fun at the same time. Skeletons can always make our day.

The concept Bony Fish with fish-skeleton-character and logo can be used by sushi restaurants, fish restaurant or by a totally different kind of company. It is a very versatile concept and a flexible character.

Bony Fish is available for licensing in most territories.

Bony Fish can be licensed as a corporate symbol, logo and brand name for limited territories and limited business areas. As such its useful for small businesses with a local market. To distinguish different licensees we will provide a localized version of the character and brand name. Example “Bony Fish Tokyo”, “Bony Fish from Spain”, “Bony Fish in UK”

Bony Fish cannot be sub-licensed, with the exception of situations where we own a substantial share of the production or company Bony Fish is licensed to. 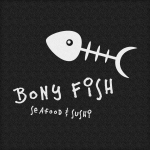 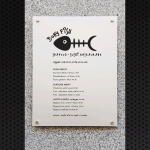